My Write Up of the Anthem 5k; the First Leg of the Louisville Triple Crown 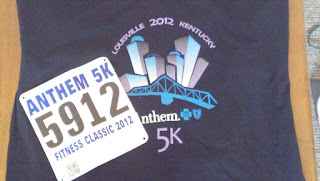 So here I am, a year removed from running my first Triple Crown..Lining up at the Starting Line to run my second Louisville Triple Crown of Running, starting with the Anthem 5K. Last year's Anthem 5K still remains my best 5K time (32:37), both my Personal Record (P.R.) and Personal Best (P.B.).

I had a couple of things going on in my head...one of them is that this time around, as I close in on my 2nd Anniversary as a Runner, I work 3rd shift, and have a newborn. My training 95% of the time occurs on no sleep, with another 3% occurring with little sleep. The other thing that was prominent on my mind is that all three Triple Crown Races will occur with me coming straight off a 12 hour shift, so no sleep.

So I took the shift Friday Night/Saturday Morning to get my mind and body ready and sharp as much as I could. I stayed hydrated (a glass of water every hour of work) and during my lunch and breaks, I watched "Spirit of the Marathon" on my tablet. So as I got off work and came home, Damary had the girls ready, and I changed clothes (I had laid them out...seriously, Race Days works out my OCD!!). Then we drove downtown and parked across from Slugger Field. There was really only about 20 minutes before time to line up, so I stayed with Damary and the Girls because that centers my soul. I then walked outside and Damary and I realized it was too cold for her to be out there with the girls just standing around waiting for me to start. So I kissed my Heart, My Princess, My Puddin' and My Precious goodbye. They all individually wished me a good race and said they would see me at the Finish Line.

I walked up and I had one game plan. I would try to hit the first mile in 10:30, which means doing something I struggle with in races, NOT letting "Race Turbo" shoot me out the gate and have me gassed later in the race, then do the second mile in 10:00, and then do the rest in all I had left in the tank. If it meant throwing up when I was done, then dammit, I would. To paraphrase Pat LaFontaine, If Mile 3 required a Suicide Pace then today was a good as any to die.

As I was waiting and running through what I know my body should feel like at the different paces I was asking of it to perform, I heard a most familiar, wonderful voice tell me Hi. It was my dear friend, Rebecca Jo. Funny thing I thought of later in the race, I think I have seen Rebecca Jo at every single race we have entered together. She is an ANGEL and I am SO BLESSED to call her a Friend. We talked right up until we started running. We wished each other a good race and off we went.

I peaked at my Garmin only to keep myself in check for that first mile. As I was running, another member of my "Running Mafia Family" told me to Kick Butt and away she ran. Thank you Lesli for always being an unconditional force of light. So I found my breathing zone (another reason I am glad I don't run with music anymore), and then I took my brain to the special place I go to when on my runs and tried keeping the stress out of my head. First mile came and went, and I did it in 10:19 (Target was 10:30). Then my kryptonite came, the second mile of a 5K. The "middle child mile" as I like to call it, always is most trying to me because it is after the Race Turbo has drained, and the tank is empty, and the crowd usually has thinned out, and I am on my own in more than one way. This time would be different, TODAY THEY WERE GONNA LEARN!! ("They", being my body...hey anything to get me motivated). In doing my "Run Less, Run More" Marathon Training, I have come to learn how to adjust my form to increase speed or conserve it on command. SO I shut down on the normal self-doubt loud voices, and changed my form to focus on my foot striking and leg turnover to match the pace I wanted. I did the second mile in 10:08 (Target was 10:00)...I can say, I have NEVER done the second mile of a 5K that fast. Then the Third Mile, the "Homecoming Mile", as I like to call it, because it brings me back to Damary and our daughters was upon me. I didn't look at the Garmin...I just pressed and focused and gave all I had. Normally I am spent here, and the Finish Line seems like YEARS away. This 5K in particular, you see the Finish Line almost immediately as you enter the 3rd mile and I felt like it taunted me, laughed at me and told me that I didn't earn the right to cross it. This time I literally gritted my teeth, beared down and said, "Thank you God for the opportunity, and I choose to honor the Gift with giving all that I have". I pumped my arms, I felt every synapse, every neuron, every muscle fiber, every tendon and asked them to give me everything they have and more. I envisioned the scene where Leah in "Spirit of the Marathon" shows determination in her face when she hit the wall. It is a silent moment, but anyone who has hit the wall, knows that look. It is the look that Jordan had in Game 5 of the 1992 NBA Finals when he had a 102 Fever and the flu and proceeded to light up the Utah Jazz; the look that Tim Tebow had in the huddle of the first game of his playoff career this past NFL season, when in OT, he told one of his WR's that he will catch the winning pass, and proceeded to make it happen; the look Leah had was that of a Champion who knows their will is greater than the challenge, not vice versa. I let the pain, the nausea, the increased heart rate, the self-doubt all flow through me, and recorded my fastest 3rd mile of a 5K ever at a 9:54 pace. I crossed the Finish Line at 31:37..a P.R., and P.B. Not too shabby for someone who hadn't been to sleep in over 24 hours.

I walked through the Runner's walkway until I heard the wonderful voice of my family. I hugged them and kissed them and told them Thank You. See, I have never taken for granted the support they give me. Then I grabbed my Powerade, and waited for the best part of the Triple Crown. The Kids Fun Run. I lined up at the Finish Line and cheered on both girls (obviously the 6 month old isn't running...yet) and beamed full of pride for them as they crossed the finish line. 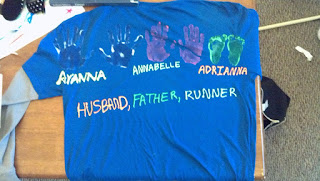 It was an amazing day, but I must admit, I was SPENT. I also knew I had another 12 hour overnight shift ahead of me, and then head straight to church and the kid's special service (on the first weekend of the month) afterwards. So yes, I haven't had a lot of sleep, but I feel good. I am wearing my race shirt, which I rarely do. Speaking of race shirts, just like last year, I designed my shirt I will be wearing for races, a Superman shirt that has the girls hand and the youngest's foot prints on the back with their names, and under it is written "Husband, Father, Runner".

So in two weeks is the Second leg of the Louisville Triple Crown, the Rodes 10K. So I am going to work on my approach and game plan for it. I just want to say Thank you to all of you who have been so wonderfully supportive of me. Much Love and God Bless. 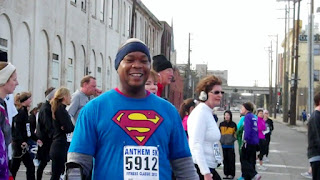 Until the Wheels Fall Off,
-Corey, The Illuminati Runner

Popular posts from this blog

Disclaimer: I received my Stunt Puppy Nano Bowl to review as part of being a BibRave Pro. Learn more about becoming aBibRave Pro (ambassador), and check outBibRave.com to review find and write race reviews!

Here is my official BibRavePro review of Stunt Puppy’s Nano Bowl. I hope you enjoy it!!

Disclaimer: I received an admission to The Running Event Influencer Experience (and subsequent product from Zwift) to review as part of being a BibRave Pro. Learn more about becoming a BibRave Pro (ambassador), and check out BibRave.com to review find and write race reviews!

Here is my Zwift review from everything I received at The Running Event in Austin, TX. LOVE THEM!

Disclaimer: I received my Shady Rays X-Series Sunglasses to review as part of being a BibRave Pro. Learn more about becoming aBibRave Pro (ambassador), and check outBibRave.com to review find and write race reviews!

Here is my official review of the incredible Shady Rays X-Series Polarized Sunglasses. I hope you enjoy it!! Use discount code "RAVE50" (Good for 50% off 2 or more items).

Corey
La Grange, KY, United States
My name is Corey. I am blessed to be married to Damary, and we have 4 beautiful children. I am a Certified Personal Trainer and Nutritionist. I am also a BibRavePro Ambassador!